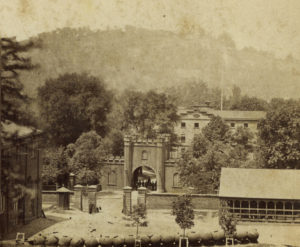 This just may be the oldest photo taken of the Lawrenceville landscape. The photo was shot by William T. Purviance who had a photography studio at the corner of Diamond and Market Streets in Pittsburgh from 1859 to 1867. The Pennsylvania Central Railroad hired him to do a series of scenic views of the areas it served. This shot of the Allegheny Arsenal’s Butler Street gatehouse was probably taken circa 1868 when he began the series. The photo is one side of a stereoview and the full card is shown below. 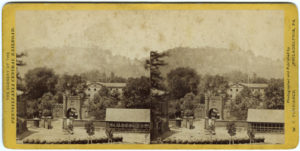