This article was written by Jim Wudarczyk. It appeared in the June 2017 issue of Historical Happenings the official newsletter of the Lawrenceville Historical Society. 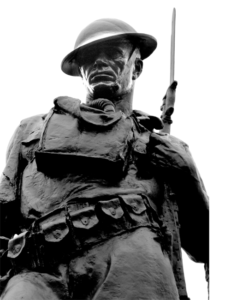 The most definitive account of Lawrenceville’s iconic “Doughboy Statue” was compiled in 2004 for the Lawrenceville Historical Society’s second published volume, A Doughboy’s Tale. . .and More Lawrenceville Stories. Since then, new information has come to light. With the passing of more than a decade, it was time to revisit the subject.

If the people of Lawrenceville had to pick one thing to symbolize their neighborhood, no doubt they would choose the Doughboy Statue that stands guard at the confluence of the neighborhood’s two main arteries of Butler Street and Penn Avenue.

How the Doughboy came to be is an interesting story. It was never intended that a monument honoring veterans be erected. Rather, the people of the Lawrenceville community got caught up in the patriotic fervor of World War I. Wanting to show their support for the men in service, they conceived the idea of holding a bazaar to raise money. In 1918, the Lawrenceville Board of Trade organized a fundraiser in the form of a carnival held in Arsenal Park.

Since the war ended before the money could reach the troops, it was suggested that Lawrenceville emulate other communities and use the funds to erect a monument to honor our troops. In order to meet the goal of $10,000, additional fundraising took place in 1919.

The monument was to honor the troops of what was then the Fifth Zone, which was comprised of the city’s Sixth Ward. The Art Commission of the City of Pittsburgh held a special meeting on February 25, 1920, and approved the plans for the statue. It was recommended that Allen George Newman of New York City be awarded the contract as sculptor. Application to the Art Commission recommended the location of the junction of Penn Avenue and Butler Street.

Dedicatory events for the Lawrenceville monument were scheduled for May 30, 1921. 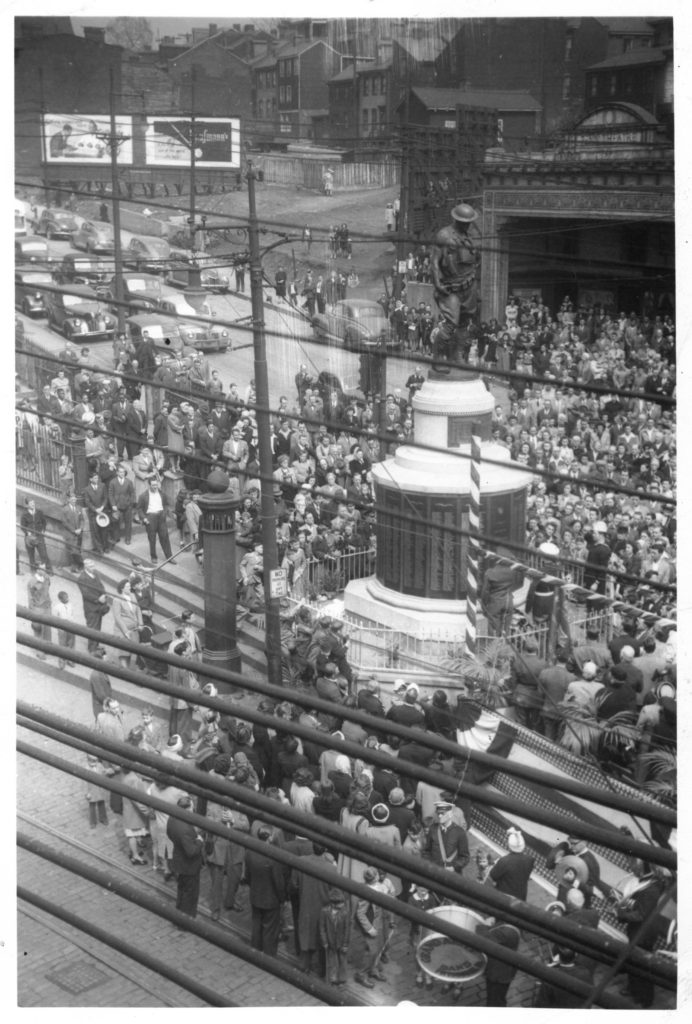 An enthusiastic crowd gathers around the newly mounted Doughboy Statue on May 4, 1947. This snapshot photo was taken by Robert Plonski (1890-1948) from the third floor of Plonski’s Tavern at 3405 Butler Street. This donated photo from Phyllis Renda was the key to the Doughboy mystery.

By the early 1940s, the Doughboy Statue was a little over twenty years old and was already showing signs of neglect. A piece in the Pittsburgh Press, January 25, 1942, noted, “Out at Penn Ave. and Thirty-fourth St. in the Lawrenceville district, the stone base of the soldier monument in front of the defunct Pennsylvania National Bank is chipped and cracked in countless places and children romp up and down the memorial.” The Pittsburgh Bulletin Index in April 13, 1944, stated that the statue was “grimy from City’s soot.”

Then, shortly after the Second World War, the Pittsburgh Press, January 20, 1946, wrote of the Doughboy, “He was supposed to look tired when he was moulded, but not as tired as he looks since Christmas…To his already weighty pack has been added a discarded Christmas tree, upside down. There are also the tattered remnants of an American flag tied to his bayonet, possibly a hangover from V-J Day.”

While there is ample documentation relating to the creation of the World War I monument, until recently all the Lawrenceville Historical Society knew about the addition of the bronze plaques with the names of the World War II veterans from the Sixth Ward was that they were added “sometime after the Second World War.”

For the last two years, Lawrenceville Historical Society’s chief researchers—Tom Powers, Jim Wudarczyk, and Jude Wudarczyk—made an exhaustive search of the archives of the University of Pittsburgh, Carnegie Mellon University, the Pittsburgh Post-Gazette, the Pittsburgh History and Landmarks Foundation, the Senator John Heinz History Center, Carnegie Library, Soldiers and Sailors Memorial, government agencies, newspapers, and other sources in an attempt to establish a date when the original statue was altered. Since the statue is so prominent in the community and a great piece of artwork by a renowned sculptor, it was astonishing that the record of the dedication date was so difficult to find. Even the City of Pittsburgh’s Art Commission had nothing in their files.

Not wanting to be deterred in the search, Tom Powers suggested that the team look into the biographies of the two architects—Karl Weber and Anthony Pyzdrowski—responsible for the project. Powers found the following reference in the September 1950 issue of The Charette, “A war memorial at the corner of Penn and Butler in Lawrenceville is the design of County Architect-Engineer Karl ‘Dutch’ Weber. The day of the recent dedication was not a memorable one for Dutch. Discovering that his name chiseled in stone on the monument was misspelled ‘Carl’ instead of ‘Karl,’ he sulked throughout the ceremonies. Still annoyed at the mistake several days later, Weber called the stone contractor and asked what could be done about it. He was told that the ‘C’ could be changed to ‘K’ for only $50. But since the Memorial Committee isn’t interested in any alterations this soon and since ‘Dutch’ doesn’t value his vanity at any more than $37.50—at the most—he’s brushed the whole thing from his mind.”

Based on the above reference, it appeared that the dedication took place sometime in 1950. Looking at microfilm of Pittsburgh newspapers in 1950 proved futile.

Interestingly, the obituaries of Weber and Pyzdrowski made no mention of their roles in the creation of the Lawrenceville landmark. Jim Wudarczyk reached out to a relative of Anthony Pyzdrowski, but again no date surfaced.

As for Art Bronze Company, this institution was housed in a building at 37th and Liberty Avenue. The building suffered damage from a fire and was razed early in 2015. When Jim Wudarczyk found the name of the company’s treasurer, he tried to reach out, but found that the phone number had been disconnected.

The research team was joined by LHS member Linda Kemmerling and began the arduous task of reviewing microfilmed copies of Pittsburgh newspapers. Jim Wudarczyk continued reaching out to various government agencies and universities for leads.

When Jim Wudarczyk and Joann Cantrell were working on the Lawrenceville book for Arcadia Publications, former Lawrenceville resident Phyllis Renda graciously allowed the use of a picture of the dedication of the World War II plaques that a family member had taken. Unfortunately, the picture was not dated. In the background were the old Penn Theater and a billboard advertisement for Kaufmann’s Department Store. Wudarczyk speculated that if the picture were enlarged, one could determine the movie being played at the time. Then the team would be able to restrict the search to the year when the particular film hit the theater circuit. Unfortunately, there was not enough detail in the photograph to make a positive identification.

Powers was convinced that the picture was a key to solving the “Doughboy Mystery.”

First, Tom Powers, Jude Wudarczyk, and Eddie Pearsick studied the various models of automobiles. Again, this did not lead to any major leads. Next, Powers zeroed in on the advertisement for Kaufmann’s Department Store. He noticed that the particular Kaufmann’s logotype used in the billboard had only been seen in the company’s newspaper advertising between March 3, 1947, and May 27, 1948.

As the leads were diminishing, the research team was losing hope of ever finding the missing piece of the puzzle.

Then on Wednesday, March 8, 2017, while doing an internet search, team member Linda Kemmerling received a link to an advertisement for Newspapers.com services. The ad showed a thumbnail page from the Pittsburgh Post-Gazette that contained a photo with a headline reading… “Sixth Ward Unveils its Honor Roll.” This ad was generated based on key phrases Linda typed into her search… “Sixth Ward” and “Honor Roll.” Searches by the other team members didn’t have this combination. The page’s tiny photograph showed a large crowd of people by what appeared to be the Doughboy Statue. Kemmerling made note of the date, May 5, 1947. 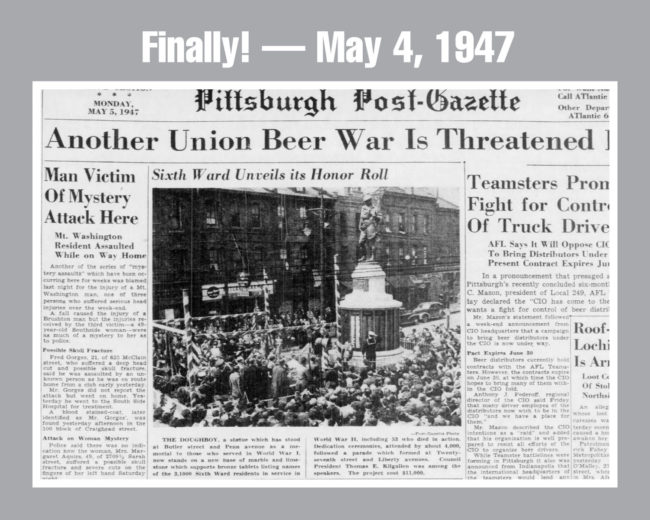 Not having a Newspapers.com account, Linda immediately raced off to the microfilm department of the Carnegie Library in Oakland. There on page 17 of the Pittsburgh Post-Gazette was the missing link. Under the photograph of the dedicatory service was a brief caption that noted: “THE DOUGHBOY, a statue which has stood at Butler street and Penn avenue as a memorial to those who served in World War I , now stands on a new base of marble and limestone which supports bronze tablets listing names of the 3,100 Sixth Ward residents in service in World War II, including 53 who died in action. Dedication ceremonies, attended by about 4,000, followed a parade which formed at Twenty-seventh street and Liberty avenues. Council President Thomas K. Kilgallen was among the speakers. The project cost $11,000.”

Turning to the Pittsburgh Press, May 4, 1947, was further evidence of the dedication date. The headline read: “6th Ward Honors Veterans Today.” While the article contained some of the information that the Post-Gazette noted, the Press noted that the parade was scheduled to start at 2 p.m. “Members of six military posts will be among 3,000 veterans, who will march. Mayor David L. Lawrence, County Commission Chairman John Kane and Dr. A.L. Lewin of the Board of Education will speak.”

It is ironic that within a few short years following the dedication of the World War II bronze plates that drew a crowd of 4,000 on May 4, 1947, the event was largely forgotten. It is further ironic that the search to find the date for the dedicatory service was found—as many discoveries are—quite by accident.