This article was written by Tom Powers. It appeared in the March 2017 issue of Historical Happenings the official newsletter of the Lawrenceville Historical Society.

These days, not many Pittsburghers realize that once upon a time Lawrenceville was an independent borough outside Pittsburgh’s city limits. I had never seen the drawn boundaries of Lawrenceville Borough until I attended a lecture in the Heinz History Center’s Detre Library about an 1859 panoramic map of Pittsburgh. 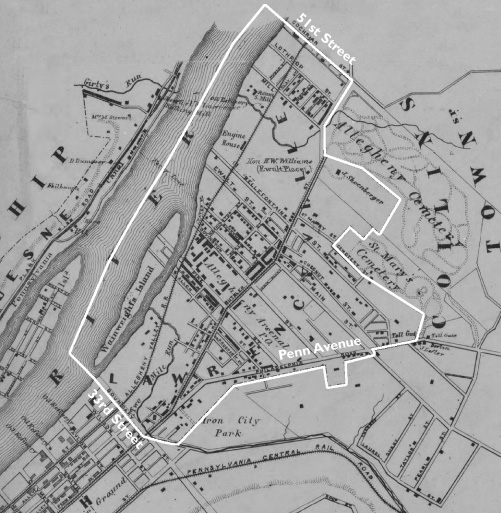 On display were several other maps including an 1862 map of Allegheny County from which the map on this page is taken. On this map, the borders of Lawrenceville Borough were clearly defined.

* A pole equals sixteen and a half feet.

Well, that large buttonwood tree is long gone, and Two Mile Run has been piped underground. These survey points are of little use in trying to recreate Lawrenceville Borough boundaries, so it was a stroke of good fortune that a contemporary (1862) cartographer was able to draw up the borough.

Originally, the northeast boundary of Lawrenceville Borough was roughly along the line of today’s Main Street or “beginning at a large soft maple tree in front of Samuel Ewalt’s land” (long gone). The borough expanded up to 48th Street in 1844 and then up to 51st Street in 1852. Interestingly, neither Allegheny Cemetery nor St.Mary’s Cemetery were ever within the borough’s boundaries.

As population grows, municipalities are stressed to perform services within their borders. This is why certain neighborhoods or communities would petition the state of Pennsylvania to form a municipality with more manageable borders. Partly because of its topography, Allegheny County currently has 130 municipalities, the most in the state. Luzerne County is second with 76 municipalities.

Today, Lawrenceville is divided into three sections within the City of Pittsburgh (which annexed the area in 1868): Lower (part of the 6th Ward), Central (9th Ward) and Upper (part of the 10th Ward). Taken together, they stretch along the Allegheny River from 33rd Street to the Sharpsburg bridge (technically 62nd Street).

If anyone can find traces of the large buttonwood or soft maple trees, let us know.

Laws of the Borough of Lawrenceville, Allegheny County, PA., Acts of Assembly, Supplements Thereto, and Ordinances Passed by the Burgess and Town Council, Pittsburgh: Barr & Myers, 1863.