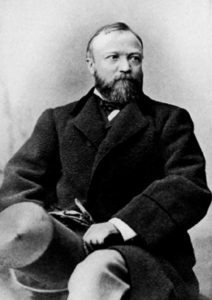 Although he was not the father of the steel industry, Andrew Carnegie successfully capitalized on this metal to become the richest man in the world. It was in Lawrenceville that the roots of his fortune took hold.

After the Civil War, Carnegie left his position with the Pennsylvania Railroad to devote all his energies to the ironworks trade. It was iron rails that the railroad ran on and Carnegie saw the possibility of a thriving business with an eager customer. He worked to develop several iron works, eventually forming in 1865 the Keystone Bridge Works which specialized in iron construction. That same year he helped organize a merger to create the Union Ironworks located at 33rd Street in Lawrenceville along the railroad line. Keystone Bridge was also located in Lawrenceville at 51st and Butler Streets. Later in 1870, Carnegie and his brother Tom had the enormous “Lucy” blast furnace built next to Keystone Bridge Works. The furnace was named after Tom Carnegie’s wife.

Given their success with Lawrenceville iron, the brothers invested in the Bessemer process to turn their iron production into steel. Soon, the Pennsylvania Railroad was running on durable steel rails produced at the Edgar Thomson Steel Works in nearby Braddock, PA. J. Edgar Thomson was, of course, the president of the Pennsylvania Railroad. Thomson was only a small investor with his namesake company but Andrew Carnegie was quite the salesman and knew who his best customer was. 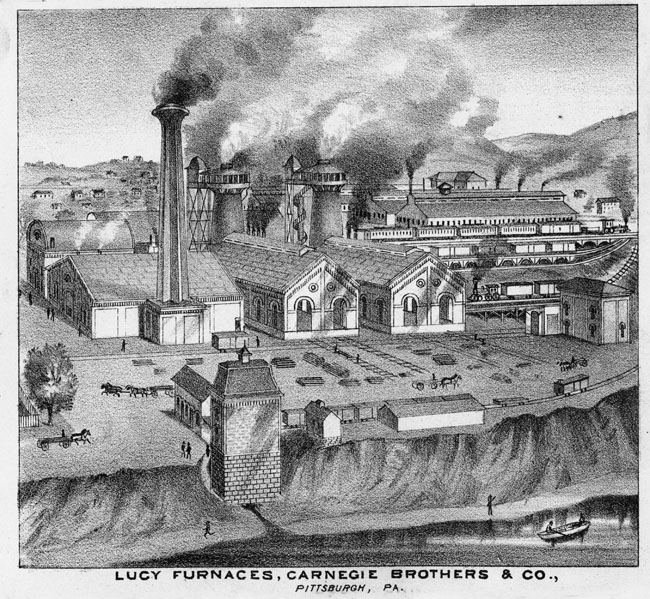 This engraving of the Carnegie Brother’s Lucy Furnace was published in 1876. The American Bridge buildings are in the background.