This article was written by Jude Wudarczyk. It first appeared in the March 2002 issue of Historical Happenings the official newsletter of the Lawrenceville Historical Society. It was reprinted in the June 2018 issue with new information. Photos, courtesy of Allan Becer, have been added to this webpage that did not appear in the 2002 article. 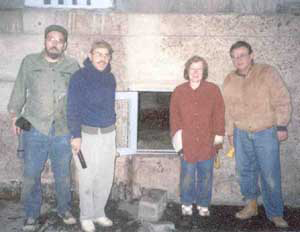 Tired but excited over their adventure, the LHS explorers pose outside the entrance of the famed “Arsenal Tunnels.” From left to right – Allan Becer, Jude Wudarczyk, Mary Johnston, and Rich Bassett. (Photo by Mark Sachon)

Ever since I was a boy growing up in Lawrenceville I heard stories about the tunnels that ran parallel to 40th Street. Many speculated that they were part of the old Allegheny Arsenal. Others guessed that their purpose was to smuggle goods or slaves from the riverbank to a safer haven. There were many descriptions of the tunnels. Some had them starting at the Allegheny River and continuing as far as Penn Avenue. Others had reported other starting or ending points.

No one would claim to have actually been in the tunnels themselves. They all knew someone else that made the mysterious underground trek. This led some of us at the Lawrenceville Historical Society to believe that the mysterious Arsenal Tunnels were nothing more than a giant hoax.

However, when two individuals, Frank Novosel and Bill Schivins, reported that the entrance was in the County Maintenance Department Complex under the 40th Street Bridge I decided to make an inquiry at the department office. I spoke with several of the workers and received information that was so similar to that provided by Frank and Bill that I could no longer believe that there was nothing to the legends. After receiving official permission to set up an exploration of the tunnel I made arrangements to have an experienced tunnel and cave explorer, Mark Sachon, co-author of Urban Blight, a Rock Climber’s Guide To Pittsburgh, make a preliminary journey through the Arsenal tunnel and report back his findings. Mark was happy to do this for us, and provided his services without charge to our society. 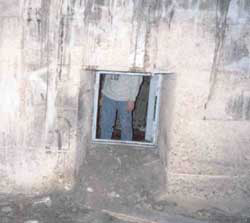 Entrance – viewed from inside looking out. Mark Sachon is standing by the door. (Photo by Allan Becer)

Mark’s report was astounding. Not only was the tunnel relatively safe for an inexperienced tunnel explorer such as me, it was obviously not a tunnel at all. More like a honeycomb of rooms, the mysterious area called for further exploration and a second trek was set up to take place on Friday, December 14, 2001.

Having already gone through, Mr. Sachon kindly agreed to lead the second excursion. Bill Siebert and Jack Grant provided access. Joining Mark and me were LHS Board members Mary Johnston and Richard Bassett and local historian and LHS member Allan Becer, co-author of Monster on the Allegheny…and Other Lawrenceville Stories.

The entranceway to the rooms is a tiny crawl space measuring three feet by three feet and runs about three or four deep. It is covered by a steel grate, which is kept locked to deny access to unauthorized persons. Navigating the entrance is a difficult task, but once having accomplished this fete one is immediately greeted by a large room measuring approximately ten feet by ten feet. This chamber is estimated to be about twelve feet high. 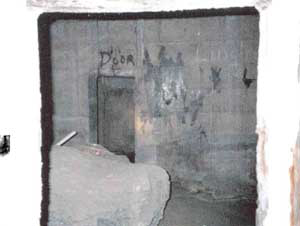 This chamber has a massive concrete slab in it. The slab is much too large to fit through the doorway. (Photo by Allan Becer) 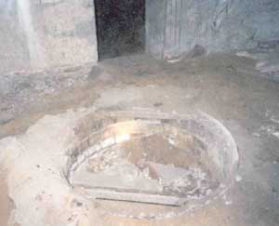 The chamber had a circular layout, which was filled with dirt. It may have been a sewer. (Photo by Allan Becer) 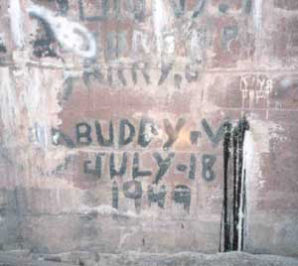 Graffiti marks many of the walls. This message is from 1949. (Photo by Allan Becer) 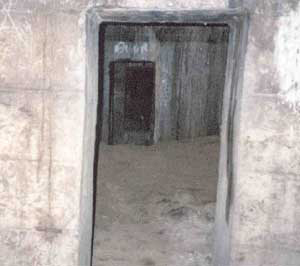 Note the series of doors leading from one chamber to the next. (Photo by Allan Becer)

There is no sign of electricity in the honeycomb, but pipes pass overhead and exit without providing any evidence that they have a function within the chambers. Obviously, they are just passing through and possibly provide water and/or gas to the buildings on 40th Street or the Arsenal Terminal. As we progressed inward the ceiling got lower, and we had to be very careful not to bump our heads. I believe that only one of these pipes was oblong in shape and the others were round.

The rooms were filled with graffiti and debris. Obviously, the construction matched that of the bridge, and not the Arsenal. The chamber walls were made of concrete. In places they were beaded with water, as was the ceiling. Occasional stalagmites and stalactites were visible. In spots rusted steel cables poke through the walls some of which have wooden blocks at the end of them. Despite the moisture on the walls and ceiling the rooms are very dry and dusty.

The doorways passing from one chamber to another required us to stoop. Only the central chambers have doorways connecting them to the next set of chambers. There were no signs of life in the chambers save for one set of tiny footprints and two spiders. Sounds of traffic could be heard overhead in the first few chambers, but then was lost only to be heard again near the end of our tour.

The dust floor gave way in spots revealing occasional brickwork on the floor, which suggests to this author that we were walking along what was once the sidewalk of 40th Street. It is known that in the 1920’s while the bridge was being built, the street was shifted to allow for the construction. According to some reports a few of the buildings on the opposite side were lifted and pushed back. 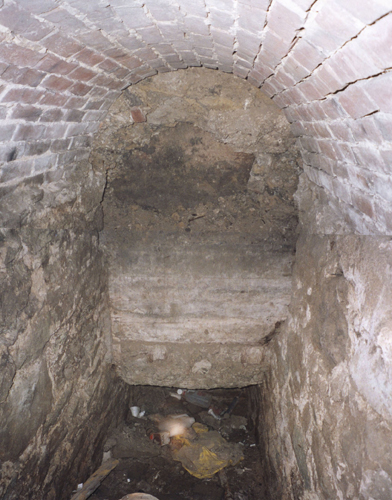 This portion of a tunnel servicing the Allegheny Arsenal was found during the 2001 exploration. Given the dimensions of the tunnel, we know exactly what it was used for. Read on to the end of this article. (The above photo by Allan Becer is a composite of two. You can see the seam in the center.)

About midway through the excursion we came across one room where the floor had collapsed revealing a tunnel of sort about four feet wide and five and a half feet high. It was oblong on three sides with an arched ceiling, and looked very much like it might have been part of the Allegheny Arsenal at one time. Only about seven or eight feet of this tunnel is visible. Allan Becer speculated that it was part of an old sewer system. I feel that it is the remains of an old hallway belonging to a building. It must be remembered that sewers are usually far below ground level, and the chamber floor was more or less ground level. The exposed tunnel was not very far beneath the surface of the chamber floor hence I feel it is unlikely to have been a sewer. However, only further investigation will settle the issue. *

Later that day Allan found out large structures such as university buildings and bridges often have these honeycombs, which serve as part of the superstructure. An architect told him that the purpose of these honeycombs is twofold. First and foremost, they are just as strong of a base as if a solid concrete slab. As they use a lot less concrete they are a lot more economical than a solid slab. Second, they serve as a dumping ground for unwanted building material, which would explain a lot of the debris we saw.

Although this is a very logical explanation,it does not explain why there are doorways connecting the chambers. Nor does it explain why there are steel cables protruding from some of the walls or why some of these cables have wooden blocks on the ends. While some questions remain, we now know that the legendary Arsenal Tunnels do exist even if they aren’t part of the Arsenal, aren’t tunnels and don’t run from the riverbank to Penn Avenue.

* Further investigation has found a likely answer to Jude’s speculation. While researching the construction of the Allegheny Arsenal, I came across a section of the 1859 Ordnance Department Report to the Secretary of War. The report on the Allegheny Arsenal (shown here is part of page 1121) states that a tunnel was dug from the river to the machine shop’s steam engines to supply them with water for their boilers. The machine shop was located right along 40th Street near where the bridge ramp is now positioned. Jude’s measurement of the exposed tunnel shown in the above photo, four feet wide and five and a half feet high, corresponds with the measurements given in the report. – Tom Powers 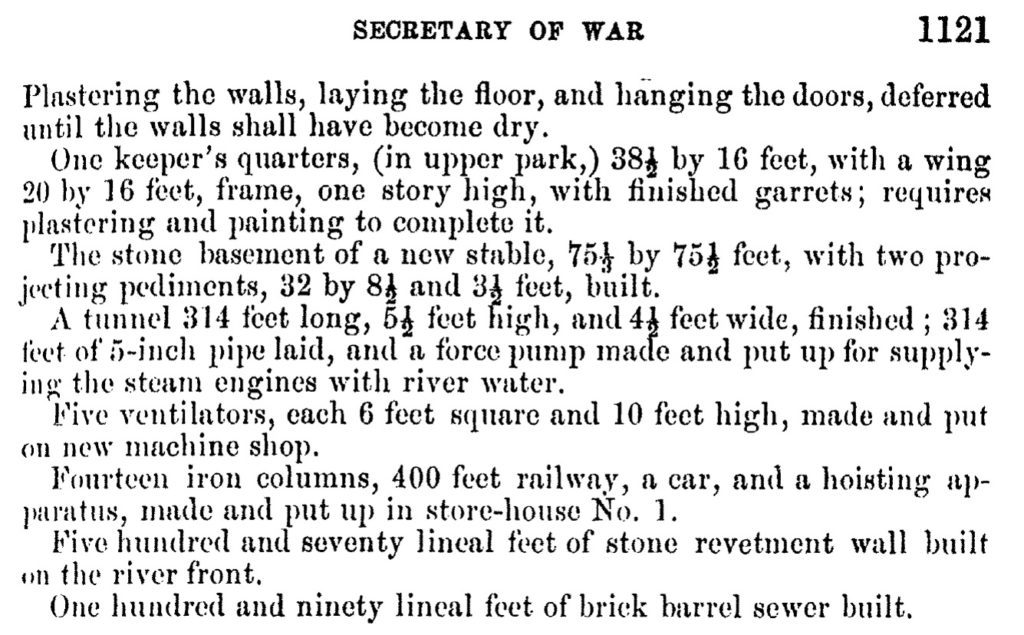