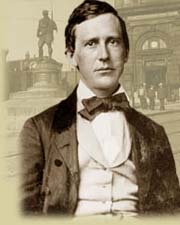 Born on July 4, 1826, while the country celebrated its 50th anniversary of independence, Stephen Foster has become Lawrenceville’s most famous native son. He was the son of William Barclay Foster, founder of Lawrenceville and Eliza Tomlinson. Foster’s parents moved to Allegheny City (now Pittsburgh’s North Side) when Stephen was very small. 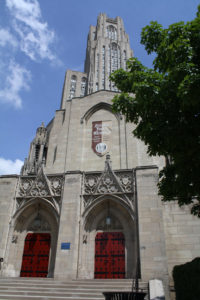 The Stephen Foster Memorial at the University of Pittsburgh. (Tom Powers)

He developed a love for music at a very tender age of about three or four, and from that point forward there was no stopping him. Foster is considered by many to be the world’s foremost composer, and is the only person to have written two state songs – “My Old Kentucky Home” (Kentucky) and “Swannee River” (Florida). A third song “Oh! Susanna” was considered by the state of California as being their state song, but it was rejected.

Today he is considered the founder of “Pop Music” and his works are played throughout the world. There are many books written on Stephen Foster and the University of Pittsburgh maintains the Stephen Foster Memorial Center in his honor. It is located in the Oakland section of Pittsburgh close to the Cathedral of Learning.