Face of a Tragedy

This article was written by Tom Powers. It appeared in the December 2018 issue of Historical Happenings the official newsletter of the Lawrenceville Historical Society. 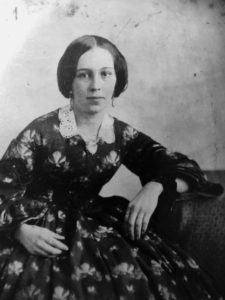 Fredalina (aka Lena, Melinda) Neckerman (1843-1862) was one of the unfortunate girls working in Room No. 1 of the Allegheny Arsenal laboratory when a spark ignited three barrels of gunpowder on the porch in front. The explosion collapsed the roof and killed 22 of 28 girls working in that room. Of the 72 girls/women killed on September 17, 1862, the above photo is currently the only known image of any of the victims. (Click to enlarge.) Tintype photo from the collection of Ryan Conley, used with permission.The LHS has researched and chronicled previously in this newsletter, in the pages of Western Pennsylvania History Magazine, and in Jim Wudarczyk’s 1999 book Pittsburgh’s Forgotten Allegheny Arsenal the disasterous explosion on September 17, 1862, which took the lives of 78 people working in a laboratory building on the upper grounds of the Arsenal property. Our research has located the position of the laboratory building, images of the surviving employees and military personnel, but we had never come across an image of one of the victims. That is until a look into the life of the chief mechanic of the Allegheny Arsenal revealed a secret tragedy in the life of Michael Neckerman.

I had come across an interesting article in the Pittsburgh Dispatch from November 2, 1890, which chronicled the then silent Allegheny Arsenal machine shops and outlined their contributions during the Civil War. Interviewed in the article was Michael Neckerman (1819-1900) who told of his experiences during his time at the Arsenal from 1841 until 1866. The article’s author states that Neckerman was “the constant assistant of Lieutenant Rodman in all his gun experiments” (i.e., the gigantic “Rodman Gun”). When Rodman was transferred to the Watertown Arsenal in Boston, Neckerman was dispatched there as well in 1859. By 1860, Neckerman returned to the Allegheny Arsenal so he could be with his family.

In this Dispatch article there was no indication of the loss Neckerman would suffer once he was back in Pittsburgh. His eldest daughter Fredalina was killed in the September 17, 1862, explosion at the Allegheny Arsenal when three barrels of gunpowder were ignited in front of the laboratory room where she was assembling bullet cartridges. Room No. 1 was closest to the explosion and Fredalina lost her life along with 21 other young girls as the roof collapsed in on the room.

It was not uncommon for employees of the Allegheny Arsenal to have family members working at the facility. In fact, laboratory superintendent Alexander McBride’s daughter Kate was working in Room No. 6 in the laboratory at the time of the explosion when the roof collapsed and killed her. Heroically, McBride continued to assist with other victims, even with the knowledge of his daughter’s death fresh in his mind. 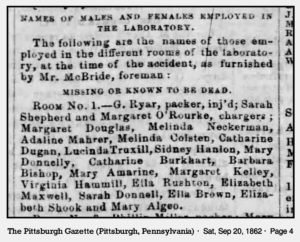 This clipping from an article in the September 20, 1862, Pittsburgh Gazette lists “Melinda” Neckerman as a casualty in Room No. 1. It’s possible that at the time Fredalina was unhappy with her given first name.

I first came across Michael Neckerman’s family while going through the census records on Ancestry.com where the family first appears in the 1850 count. There appeared Michael, his wife Matilda, a 7-year-old daughter Fredalina, and 1-year-old son Irwin. The 1860 census showed that the now 17-year-old Fredalina was going by the name “Lena” and that another daughter, Adelaide, was added. Adelaide was evidently born in 1851, and by the 1870 census, Adelaide was the only child in the Neckerman’s home on 39th Street. The home was located across the street from where the 1866 Officer’s Quarters building still stands today.

Continuing on Ancestry.com, I accessed a couple family trees that had Michael Neckerman in them. This is where I found the photo scan of a tintype attributed to Fredalina. The current possessor of the tintype is Ryan Conley, descended from Fredalina’s sister Adelaide. Also in Ryan’s possession is a diary from Michael Neckerman, written three months before his death in 1900.

In the diary, Neckerman wrote the following about the family tragedy: “Our oldest daughter, Fredalina, who was engaged to a brave young man, saddler by trade, lost her life in the terrible explosion of the powder magazine in the Arsenal on September 17, 1862. One hand was found on which was the engagement ring by which it was identified, and was buried in Allegheny Cemetery with seventy-four other unfortunate young ladies (final count is 78 deaths, 72 of which were girls/women –ed.). Her intended, William Körning, through grief, enlisted in the army and lost his life in a battle in Virginia. That was the hardest blow that ever befell us, although there is some consolation in knowing that they both died for their country.”

The above quote was translated from the German by William Miller, Jr. (1884-1920), Michael Neckerman’s grandson.

So far, Fredalina’s is the only image we have of an Allegheny Arsenal explosion victim. Hopefully there are other photos out there that can help memorialize those lost in this tragic accident.