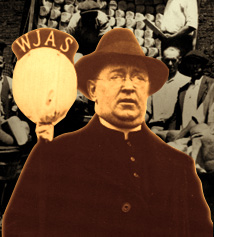 James Renshaw Cox was born March 7, 1886, in Lawrenceville. He worked as a newsboy, a department store clerk, a mill hand, a railroad worker, and a taxicab agent, but still found time to attend Holy Ghost College (now Duquesne University). There he earned his bachelor’s degree. Entering the seminary at St. Vincent’s in Latrobe, PA, he was ordained by Archbishop Regis Canevin of Pittsburgh on July 11, 1911.

During World War I, Cox served from September 1917 to August 1919 with a hospital in France. When he returned to Pittsburgh he was named chaplain of Mercy Hospital and became very active in public service. At the same time, he continued his schooling and in 1923 received a master’s degree in education from the University of Pittsburgh, the first Catholic priest to receive a degree from Pitt. Also in 1923, he was named pastor of the city’s oldest church, Old St. Patrick’s Church — the youngest priest ever appointed to that church. 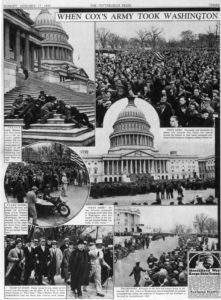 This photo montage is from the January 17, 1932 Pittsburgh Press. Click on photo to enlarge. To download the full size image right-click on base image and select “Save Link As.”

While at St. Patrick’s, Father Cox was fortunate to be blessed by a new medium that proved to be a natural for him — radio. His weekly broadcasts on WJAS expanded his parish well beyond the confines of St. Patrick’s small church. Father Cox’s sermons evidently touched a nerve. In 1930, he was voted one of Western Pennsylvania’s ten outstanding citizens in a poll conducted by the Pittsburgh Advertising Club and the Pittsburgh Press. That same year he was voted the most popular radio artist in Pittsburgh in a contest held by the Pittsburgh Sun-Telegraph. But Father Cox was no ordinary radio entertainer.

He put into practice what he preached and St. Patrick’s became known for its charitable functions, especially aid to the area’s unfortunates. Father Cox had organized a soup kitchen as early as 1925, and as the Depression deepened, St. Patrick’s soup kitchens and bread lines expanded to meet the need, feeding a hundred or more people a day by enlisting Pittsburgh merchants and businessmen to donate to the cause. 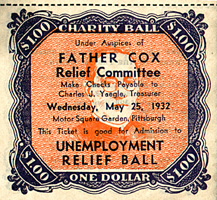 As this event ticket shows, Father Cox was very active in fundraising for his causes.

In January of 1932, Father Cox decided the only way to find help for the jobless was to pay a visit to the Capitol in Washington, D. C. He and his associates planned the trip during meetings in the basement of St. Patrick’s, publicized it in the Pittsburgh newspapers and on his radio broadcasts, and offered trucks, cars, and food to those willing to participate in the venture. (Secretary of the Treasury Andrew Mellon ordered his Gulf Oil gas stations to dispense free gas to the marchers and when President Hoover found out about that, he compelled Mellon to resign.) Many answered the call and on January 5, 1932, an estimated group of forty-five thousand people gathered to march to Washington. Father Cox made only three requests of his followers: “No alcohol — no weapons of any kind — and no grouches.”

The march sparked the formation of the Jobless Party. The Jobless Party supported government public works and labor unions, and spread from Pittsburgh to other major cities. Father Cox became the Jobless Party’s first presidential candidate, running on the slogan “Either my party or Communism.” In September 1932, however, Cox pulled out of the election giving his support to the Democratic Party ticket and Franklin Roosevelt. This effectively led to the demise of the Jobless Party.

Father Cox was rarely out of the Pittsburgh newspapers in the 1930s. He had a run-in with another famous Catholic radio priest, Father Charles E. Coughlin. Coughlin had a nationwide radio network contract in the ’30s and used the airwaves to denounce bankers, internationalists, labor unions, Socialists, Communists, the New Deal, and finally, Jews as the villains who had caused the Depression. It was the anti-Semitism that provoked Father Cox to denounce Coughlin in a 1939 speech, later printed in a pamphlet entitled “Hitler’s Hatchet Man.” Within a couple of years, Coughlin, in a maelstrom of controversy, lost his radio contract and was silenced by the Catholic Church.

During the 1940s Father Cox was less involved in politics. He served his parish, took parishioners on pilgrimages to Europe, continued his radio broadcasts, and stayed very much involved with helping the needy until his death on March 20, 1951. The estate left by Pittsburgh’s “pastor of the poor” was a mere $1,238. Here was a man who practiced what he preached.

Below are two 11-minute radio sermonettes given by Father Cox circa 1945 on WJAS in Pittsburgh.

The above sound files come from the Archives Service Center at the University of Pittsburgh where the James R. Cox Collection is maintained.