In 1814, William B. Foster (father of Stephen Foster) named his planned community near Pittsburgh in a patriotic fervor for war hero, James Lawrence. Foster was not the only real estate developer with that idea. James Lawrence had namesake towns in Georgia, New Jersey (Lawrence’s native state), and New York. There are also counties in Alabama, Arkansas, Illinois, Indiana, Kentucky, Missouri, Mississippi, Ohio, Pennsylvania, and Tennessee named for him. 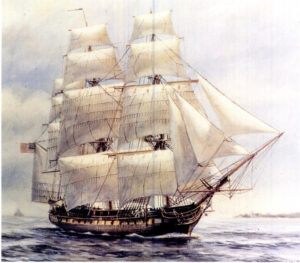 During the War of 1812, Lawrence commanded the U.S.S. Hornet, which captured the H.M.S. Peacock, and was promoted to Captain as a result. On June 1, 1813, commanding a new and untrained crew on the 49-gun frigate U.S.S. Chesapeake off Boston, Lawrence accepted a challenge from Philip Bowes Vere Broke, captain of the 38-gun H.M.S. Shannon. Four years Lawrence’s senior, Broke had commanded the Shannon for six years, and had the best trained crew in the Royal Navy.

In less than 15 minutes, Lawrence’s crew was overwhelmed. Mortally wounded, Lawrence shouted, “Tell the men to fire faster and not to give up the ship; fight her till she sinks!” True to his words, every officer in the Chesapeake’s chain of command fought until he was either killed or wounded. Even so, the battle was lost in under an hour, the Chesapeake was captured, and Lawrence died four days later, leaving his wife and a daughter. 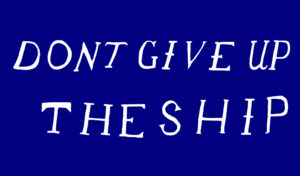 After Lawrence’s death his friend and fellow officer Oliver Hazard Perry ordered this large blue battle ensign. This flag was displayed on Perry’s flagship during a victorious engagement against the British on Lake Erie in September 1813. (Wikipedia)