This article was written by Tom Powers and Jim Wudarczyk. It appeared in the December 2018 issue of Historical Happenings the official newsletter of the Lawrenceville Historical Society. 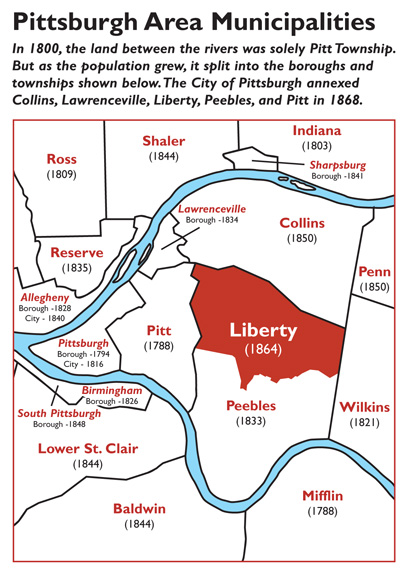 Prior to the American Civil War, the City of Pittsburgh consisted of approximately nine square miles and incorporated what we now know as Downtown, the Hill District, and part of the Strip District. Beyond those scant boundaries were a number of small villages and rural townships.

When Helen Wilson, vice president of the Squirrel Hill Historical Society, asked the Lawrenceville Historical Society if we had any information on a “Liberty Township,” it set off a search to identify some of the villages, boroughs, and townships that eventually comprised some of the East End neighborhood of Pittsburgh.

In tracing some of the municipalities that eventually comprised many of the eastern communities of Pittsburgh, one finds that neighborhoods like Lawrenceville, East Liberty, Garfield, Point Breeze, Shadyside, Bloomfield, and Squirrel Hill were formerly part of Pitt Township. In Annals of Southwestern Pennsylvania Volume 1, Lewis Clark Walkinshaw gives a vague description of the boundaries of Pitt Township. He indicates, “Pitt Township was named for Fort Pitt, and was the municipality bounded north and west by the Allegheny and Ohio.” Over time, Pitt Township was reduced several times.

One township carved from Pitt Township was Peebles. Court dockets indicate that it was incorporated November 26, 1833. Wikipedia shows four maps under Collins Township, Allegheny County, Pennsylvania. Based on these maps, it appears that Peebles encompassed a large geographic area that ran from the borders of the city, Lawrenceville, and the remainder of Pitt Township on the west to the current city line on the east. It also extended from the Allegheny River on the north to the Monongahela on the south.

Lawrenceville Borough split off from Peebles on February 18, 1834. The boundaries were smaller in comparison to the area that we know today. Our story and map about the borough appeared in the March 2017 newsletter.

Just beyond Lawrenceville was the village of Hatfield, which was conceived by George A. Bayard as a real estate venture. Hatfield was located on Butler Street between 48th and 49th Streets. Writing in the April 1926 issue of the Western Pennsylvania Historical Magazine, P. W. Siebert noted that George A. Bayard owned land across the Allegheny River and lived in what is now a part of the Allegheny Cemetery near the site of the soldiers’ plot.

Collins Township was created from the northern portion of Peebles. The township was named for a prominent lawyer named Thomas Collins, who acquired a portion of George Croghan’s extensive landholdings. George T. Fleming’s History of Pittsburgh and Environs, Volume 1, shows the boundaries as the Allegheny River on the north to Negley’s Run on the east to the Greensburg Pike (now Penn Avenue). This encompassed the old Eighteenth and Nineteenth Wards, which corresponds to the present Ninth and Tenth Wards of the City of Pittsburgh.

As for Liberty Township, there was nothing to indicate its presence until LHS secretary Phil Weber, an avid researcher of Pittsburgh’s East End, noted that Liberty School in Shadyside was probably named for the former township. He was convinced that the township disappeared in 1868 when the City of Pittsburgh underwent a major expansion.

Thanks to the help of LHS member Michael Murphy, a records specialist for Allegheny County, the books in the Court House were located that showed that Liberty Township had indeed existed. Based on the documents, we were able to determine that the municipality had existed only for two-and-one-half years. It was formed from Peebles Township and was incorporated on December 3, 1864. The records show that the Commonwealth of Pennsylvania accepted the request for the creation of the new township based on the fact that there were a sufficient number of voters residing within the boundaries of Peebles Township to justify partitioning it into two municipalities. The boundaries were readjusted on July 28, 1866, when Mr. James Murdoch and others petitioned the Commonwealth, as several of their farms were partly in Peebles and partly in Liberty. The petition requested that their landholdings be included in Liberty Township.

On April 6, 1867, an Act of Assembly by the Pennsylvania legislature gave approval to the City of Pittsburgh to annex the surrounding municipalities of Collins, Liberty, Peebles, Pitt, Oakland, and Lawrenceville. Later that year those communities voted to approve the consolidation. (Allegheny City was also part of the consolidation effort, but their voters refused the annexation, which would ultimately happen in 1907.)

Consolidation was finalized on June 30, 1868, and Liberty Township ceased to exist as the area became the 20th and 22nd Wards of Pittsburgh. Today the area is known as the 7th and 8th Wards.

During its short existence, one finds a number of prominent Pittsburghers residing in Liberty Township. The following eight township residents are those we highlighted on the Liberty Township map (click on map to enlarge). 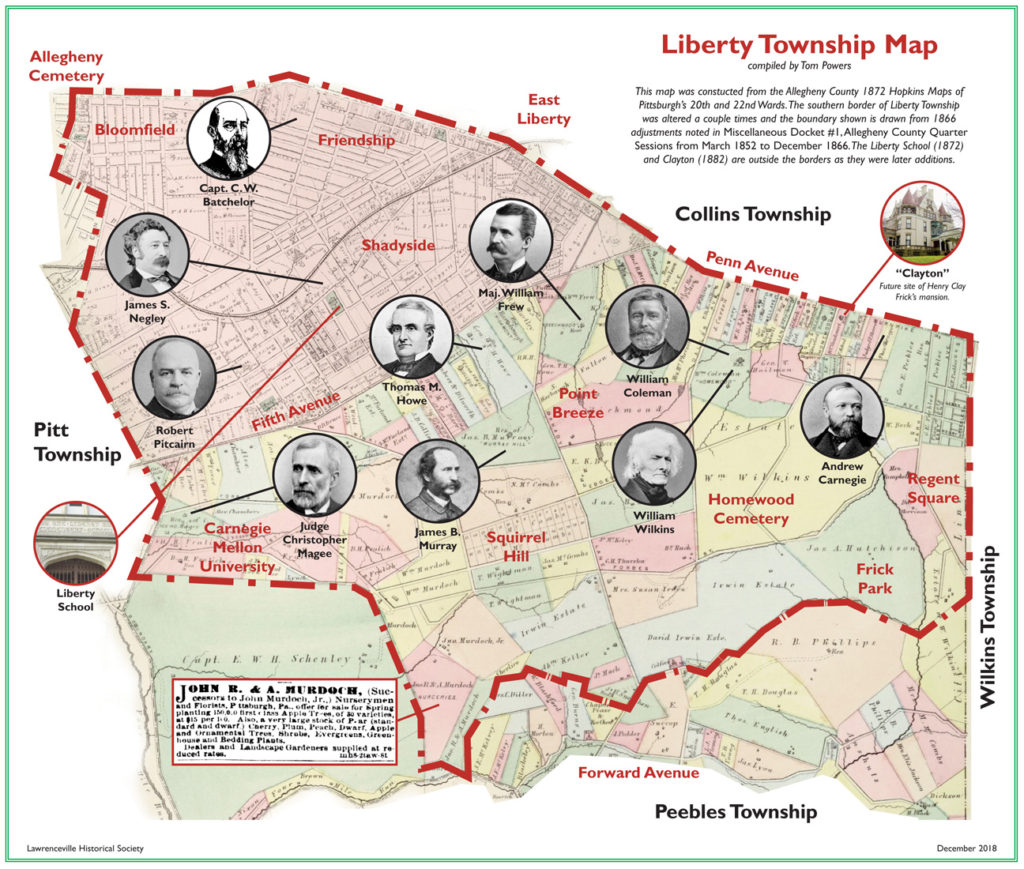 Capt. Charles W. Batchelor (1823-1896) — Started his career piloting steamboats and eventually started building them. After 1855 he came ashore and became involved with marine and fire insurance as well as banking in Pittsburgh. By the end of his life he also had interests in the oil and gas industries. Batchelor married into the Vandergrift family, who also got their start on the river.

Andrew Carnegie (1835-1919) — On his way to becoming the richest man in the world, Carnegie owned a house (dubbed “Fairfield”) on Penn Avenue from 1861 until he moved to New York City in 1867. He turned the house over to his brother Thomas, who with his wife Lucy, raised nine children there. Lucy was the daughter of their neighbor William Coleman.

William Coleman (1808-1878) — Coleman worked as a bricklayer until he went into the carriage spring business, which led into iron manufacturing. He later owned vast coal mines in Illinois and manufactured coke. He was one of the first men to recognize the value of the Bessemer steel process. His business and family connections with the Carnegie brothers (see above) added to his fortune. Coleman in 1865 bought the estate of Judge William Wilkins for whom the neighboring township was named. Until it was razed in 1924, the Wilkins’ mansion “Homewood,” stood near the corner of Dallas and Penn.

William Frew (1826-1880) — Started out in the grocery business, but in 1859 he formed a partnership with Charles Lockhart to produce and refine petroleum. The company of Lockhart & Frew built the first Pittsburgh refinery, the Brilliant Oil-works, near Negley Run on the Allegheny River. The company became one of the founding members of the Standard Oil Company in 1876. Frew was connected with several other businesses but he was best known to Pittsburghers as a public speaker on a variety of subjects. He attained the rank of major serving with the 15th Regiment of the Pennsylvania Militia during the Civil War. His home “Beechwood” gave its name to the boulevard that snakes its way through Pittsburgh’s East End.

Thomas M. Howe (1808-1877) — Served in the U.S. House of Representatives from 1851-1855. Howe was a delegate to the 1860 Republican National Convention that nominated Abraham Lincoln as the candidate for president. During the Civil War he was chairman of the Allegheny County committee for recruiting Union soldiers. Howe started out in the dry goods business, but eventually branched out into banking and steel. He was the first president of the Pittsburgh chamber of commerce. He was an original incorporator and president for 30 years of Allegheny Cemetery.

Judge Christopher Magee (1829-1909) — A native of Pittsburgh, Christopher Magee graduated from Philadelphia’s University of Pennsylvania Law School in 1852. He returned to Pittsburgh and set up a law office downtown at Liberty and Wood Streets. Magee was appointed Judge of the Court of Common Pleas in 1885. His cousin was Christopher Lyman Magee, notorious political boss of Pittsburgh during the latter half of the 19th century. Judge Magee was one of the corporators of Shady Side Academy as well as Allegheny Cemetery and Children’s Hospital of Pittsburgh. His former home was located on today’s Carnegie-Mellon campus.

James B. Murray (1818-1884) — His name lives on today as the eponymous avenue that runs through Squirrel Hill’s shopping district. [The road was probably named for his father Magnus M. Murray (1787-1838) who was twice mayor of Pittsburgh and nephew of William Wilkins.] James B. Murray worked for the Sligo Iron Works of Pittsburgh. A clerk by trade, he was also involved in banking. At one point he was the president of the Exchange Bank. Murray’s nephew who resided with him for a while, George W. Guthrie, married neighbor Thomas M. Howe’s daughter Florence. Guthrie would later be mayor of Pittsburgh from 1906 to 1909 and ambassador to Japan from 1913 to 1917.

James S. Negley (1826-1901) — Achieved the rank of Major General during the Civil War and he played a key role in the Union victory at the Battle of Stones River. His varied career ranged from horticulturist, railroader, and   U. S. Representative from Pennsylvania. A scion of the well-connected Negley family, his aunt Sarah married Thomas Mellon. During the 1877 Railroad Riot, Negley served as commander of the militia organized by the city of Pittsburgh to maintain order.

Robert Pitcairn (1836-1909) — Born in Scotland, he headed the Pittsburgh Division of the Pennsylvania Railroad in the late 19th century and was the brother of the Pennsylvania Plate Glass Company founder, John Pitcairn, Jr. Robert and fellow Scot Andrew Carnegie worked their way up the P. R. R. corporate ladder. He was also a friend and financial backer of George Westinghouse. The borough of Pitcairn was named in his honor. Pitcairn was responsible for sending the first relief train to Johnstown to assist flood victims in 1889.

William Wilkins (1779-1865) — Wilkins served as the second for Thomas Stewart in the last duel fought in Pittsburgh. The confrontation between Stewart and his rival, Allegheny County Prothonotary Tarleton Bates, left Bates dead. Subsequently, Wilkins worked diligently to become one of the most civic-minded men in Pittsburgh. He was active in both banking and politics. Wilkins served in all three branches of the government: as a federal judge, as a member of both the House and Senate, and in the executive branch (Minister to Russia, Secretary of War).

While the mystery of Liberty Township has been solved, this municipality—like so much of early Pittsburgh history—deserves further study.